CD with works by Romuald Twardowski

Romauld Twardowski was born in Lithuania in 1930. Growing up in Vilnius, he began studying violin during the German occupation and later took up piano and organ. At the age of 14 he started playing organ at two local churches, thus beginning an association with sacred choral music that has stayed with him all his life. He studied piano and composition at the Lithuanian State Conservatory, graduating in 1957. After moving to Warsaw, he continued his studies and in 1961 won the Young Composer’s Competition of the Union of Polish Composers (for his Antifone per tre gruppi d’orchestra) that led him to study in Paris with Nadia Boulanger.

Fantazja hiszpanska (‘Spanish Fantasy’) is one of three genre pieces Twardowski originally composed for violin and piano and later orchestrated (the other two, also on this album, are Niggunim and Capriccio in Blue). Inspired by flamenco music he heard during a trip to Spain, the Fantazja consists only of original material, showing how deeply the composer absorbed the spirit of Andalusian music without having to resort to using authentic folk material. In that sense it joins works by such diverse non-Spanish composers as Rimsky-Korsakov, Chabrier and Ravel. Composed in 1984, the piece has also been transcribed by Twardowski for cello and piano. Violinist Roman Lasocki and the Philharmonic Orchestra of Zielona Góra gave the first performance of the orchestral version.

The national flavour is established at the outset by a bold orchestral statement of a traditional Spanish harmonic progression: tonic, lowered mediant, lowered supertonic and tonic (C–E flat–D flat–C—although in this case they are open fifths, not triads). Additional iterations of this idea separate improvisational passages from solo violin and woodwinds (initially clarinet) that lead to the second section: a lovely dance built on the same harmonic progression but with a more fluid sense of tonality. Its beguiling triple metre is enhanced by frequent syncopations. After a brilliant cadenza from the soloist, the tonality changes from D minor to D major and the work builds to a vigorous conclusion.

Throughout his career, Twardowski has been a strong supporter of music education and has composed many works for young performers. He says he wrote his string-orchestra Serenade ‘thinking of the young virtuosos studying at the Zenon Brzewski school of music in Warsaw. The piece is a real firework, sparkling with wit and ingenuity. The audience of the National Philharmonic welcomed the world premiere (21 September, 2004) with great enthusiasm.’

In three movements, the Serenade demonstrates the composer’s masterful use of strings and his skill in making the most of their capabilities. The first movement, full of capricious rhythms, is essentially in sonata form. It hews generally to C major, but the tonal centre shifts often and usually in non-functional ways. A lyrical idea opening with a rising minor second followed by a rising minor third contrasts with the relentless activity of quavers and semiquavers elsewhere in the texture. The second movement, in the composer’s words ‘full of lyrical reverie’, is in A minor. It initially alternates bars of 3 and 2 but then settles into a soothing, lush 4/4 with constant triplet motion propelling it forward. The final movement, which Twardowski describes as ‘an oberek full of fire and vigour’, returns to C major. The presence of this national Polish dance (also explored by Chopin, Wieniawski and many other native composers) provides one of the few identifiably Polish accents in the Twardowski works on this programme. Beguiling and playful, it combines lyrical ideas with rhythmic motifs and allows each string section an important part in the constantly shifting texture.

Twardowski calls the Violin Concerto ‘an example of a trend known as the new simplicity.’ The term describes a stylistic movement often associated with Twardowski’s countryman Henryk Mikołaj Górecki. In fact, the writing in some of the Concerto’s slow passages is very reminiscent of similar moments in Górecki’s string works. Throughout Twardowski’s Concerto, the soloist and string orchestra exist in perfect balance, sometimes playing off each other and at other times playing complementary roles in the overall texture. The soloist plays almost non-stop. The harmony of the piece is based mostly on triads, combined in such a way as to create a rich and colourful background for the soloist. Violinist Andrzej G?bski premiered the work with the Zenon Brzewski Warsaw String Orchestra in 2006.

In the very sombre A minor opening, the soloist introduces a rhapsodic but highly chromatic theme, the first three notes of which generate a great deal of the movement’s melodic material. Tempo and intensity build almost imperceptibly until a thinning out of the texture leads to a return of the opening tempo and the beginning of a new movement—more diatonic and lyrical in a warm G major. The final movement segues without pause. Fusing lyricism with rhythmic propulsion, it climaxes in a bravura cadenza for the soloist followed by a return to the movement’s opening idea. The tonality, which has previously been fairly fluid, settles into a definitely conclusive D major.

Niggunim ‘Melodies of the Hasidim’ brings together authentic melodies of Hassidic Jews collected from the regions of Góra Kalwaria in Poland and Belz in Western Ukraine (near the Polish border). Twardowski was introduced to them by Marian Fuks, owner of a vast collection of Jewish music, and the composer eagerly seized the opportunity to preserve these remnants of a now nearly extinct Polish Hassidic culture. This orchestral arrangement of the violin/piano original premiered at the first Jewish Culture Festival in Kraków in 1991, with Roman Lasocki as soloist.

Solo clarinet introduces the first melody, which is soon taken over by the violin. Rife with augmented seconds that assure its Hebraic quality, it develops in quasi-improvisatory fashion over sustained string chords. Woodwinds add colour to the sound and lead to a con moto passage where the soloist still seems to be making it up as he or she goes along. A brief cadenza segues to a new section introduced by thick chords from full orchestra. A second cadenza, more extended than the first, introduces the final segment, which is more vibrant and dance-like. The brighter colours (in some passages, Twardowski’s orchestration here recalls the piquancy of Joaquín Rodrigo) and irresistible rhythmic energy easily dispel the gloomy mood of the work’s opening.

The final work on this programme, Capriccio in Blue, was premiered in its orchestral version at the 1979 Do-Re-Mi Festival—a national event promoting contemporary music for young people—in Łódź. Bearing the subtitle ‘George Gershwin in memoriam’, it is one of two Twardowski works inspired by the great American composer (the other, written in 1986, is Symphonic Variations on a Theme by George Gershwin).

The piece opens with a lengthy cadenza for the soloist. Once the orchestra enters, one hears occasional harmonic flavouring and syncopated rhythms reminiscent of Gershwin, but the American’s influence comes most prominently to the fore in the lyrical theme that follows. But this is not faux-Gershwin—Twardowski’s originality is stamped on every bar, especially in the ensuing passage featuring unmissable syncopations. A jazzy lick for solo clarinet leads to a second lyrical idea, but the syncopations return. A second, shorter cadenza leads back to the opening material. This cross-pollination of two widely divergent composers and cultures has resulted in something delightfully original—neither American nor Polish, but highly entertaining no matter where it comes from.

In a 1974 interview with the Polish music historian B.M. Maciejewski, Romauld Twardowski set out some of the guiding principles of his work: ‘I do feel I am a born contrapuntist and feel the polyphonic line very much in my psyche’, he said. ‘Give me the logical Bach or even Lutosławski any time. I can even do without Ravelian orchestration or Szymanowskian impressionism. For me, clarity of expression is the most vital issue.’ The works recorded here demonstrate that clarity in the context of music that blends tradition and modernity with most refreshing results. 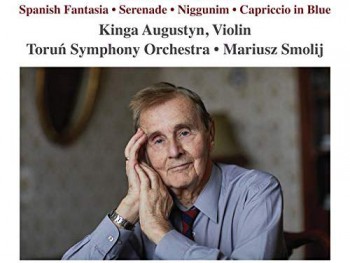