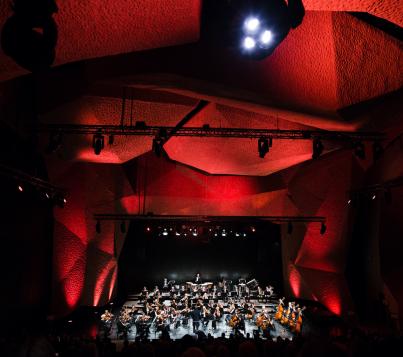 Toruń, a city pervaded by history and culture, has been striving for its own professional symphony orchestra ever since Poland regained independence. The first attempts to establish the orchestra were made in the 1920s, when the Pomeranian Music Society and the Conservatory of Music, which educated outstanding instrumentalists, were very active. However, the difficult post-war situation did not allow the music ensemble to quickly return to regular activity. In 1975 Szymon Kawalla, a teacher at the Music School, together with its director Bogdan Bilski organised a concert to celebrate the 30th anniversary of the People’s Republic of Poland entitled ‘Musical Republic’. The solo parts were played by two outstanding figures of classical music – Regina Smendzianka (piano) and Stefania Toczyska (alto) and they were accompanied by an orchestra composed of teachers from the music school. The concert, which was broadcast on television, was met with great applause, which certainly contributed to the formation of the orchestra four years later. The first realisation of the aspirations of Toruń musicians was the creation of a string quartet in 1976. This ensemble gave many concerts that awoke the desires and dreams of other musicians. It was not until 30 December 1978 that the Minister of Culture and Art, Zygmunt Najdowski, issued a decision on the establishment of the State Chamber Orchestra and granted it the status of a state orchestra. In 1979, Szymon Kawalla was appointed as the director and artistic manager and Andrzej Kobylecki as the deputy director. In 1990 it was moved under the management of the City of Toruń. The orchestra, as a local government institution, owes its dynamic development to the city. In February 2006 it became Toruń Symphony Orchestra. The ensemble has permanently become part of the city’s cultural landscape, through the organization of concerts for the citizens of Toruń and glorifying its name on numerous national and international tours. Throughout its history, Toruń Symphony Orchestra has given nearly three thousand concerts in all significant Polish cities and in many European countries (including Belgium, Switzerland, the Czech Republic, Slovakia, Germany, Denmark, the UK, Italy, France, Belarus, Lithuania). It also made appearances at prestigious festivals. The orchestra can boast of a month-long tour of China and participation in two Opera Gala concerts in Pamplona. In October 2010, Toruń Symphony Orchestra played a concert at the Cirque Royal in Brussels. In July 2010, the orchestra accompanied Jose Carreras during his performance on Motoarena Stadium in Toruń. In December 2015, the new headquarters of Toruń Symphony Orchestra was officially opened at the Jordanki Cultural and Congress Centre. The modern and impressive interior houses a Concert Hall for the audience of 882 and a Chamber Hall for 287. The ensemble also has dressing rooms and administration rooms at their disposal, complete with a spacious Rehearsal Room, which is also a concert venue.

A significant event in the orchestra’s history is the International Summer Festival ‘Toruń - Music and Architecture’, currently held under the name ‘NOVA MUSIC and ARCHITECTURE’, which has been organised annually since 1997. The idea of the festival is to present classical music in historical interiors. Festival concerts start at the end of June, take place in July and August and end on the first weekend of September.

One of the most prestigious cultural products of Toruń Symphony Orchestra is the International Violin Festival and Competition, which aspires to become one of the most important musical events on the map of Poland and Europe. The fifth edition of the event was held in October 2019. International jurors headed by Ilya Kaler, the only world’s first prize winner in three major international violin competitions, excellent accompanying events, artists of international format and elite virtuoso violinists from all over the world, once again provided everyone with enormous satisfaction and a musical feast of the highest order. The Astrolabium statuette was awarded to the first prize winner, Elias David Moncado (Germany).

The orchestra has made numerous recordings for Polish Radio and Television and Radio Suisse Romande, as well as a recent CD with music by Romuald Twardowski, recorded by the orchestra in December 2017, with violinist Kinga Augustyn under the direction of Mariusz Smolij.

Over the decades the orchestra has cooperated with the best conductors:

An important aspect in the activities of Toruń Symphony Orchestra is the musical education of children and young people, which covers not only Toruń but also the entire Kuyavian-Pomeranian region.

Moreover, the Orchestra has been cooperating with Karol Szymanowski Music School Complex for many years, enabling outstanding young artists to perform as soloists at specially organized concerts.

The institution has often been a beneficiary of various projects, e.g. from the Ministry of Culture, National Heritage and Sports, Institute of Music and Dance, National Centre of Culture, under which it has been organising numerous concerts and anniversary celebrations, occasional events and festivals, supporting young artists or buying or replacing office and stage equipment as well as instruments.

The current director of Toruń Symphony Orchestra is Przemyslaw Kempinski, the deputy director for artistic matters is Dainius Pavilionis and the first guest conductor is Adam Banaszak. The current artistic team of the Orchestra consists of 53 artists and the administrative team – 11 employees.

*cooperation with the Toruń Symphony Orchestra